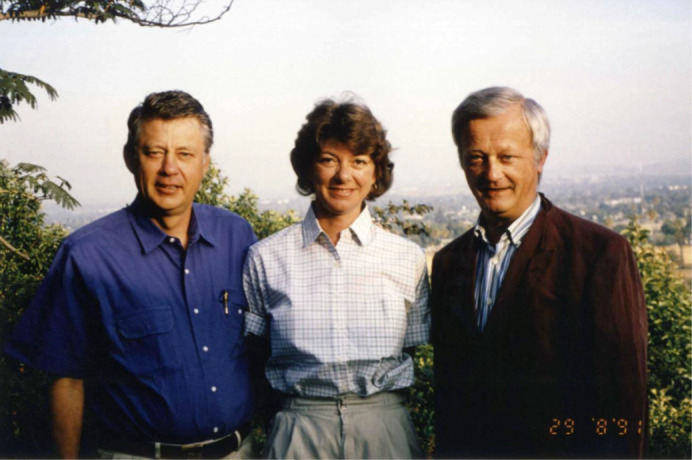 Anthony (Tony) W Norman was born into an “academic” family in 1938 in Ames, Iowa. He obtained his masters and doctoral degrees at the University of Wisconsin–Madison. His PhD thesis dealt with “the preparation, distribution and metabolism of tritiated vitamin D" (1963) with Hector F DeLuca as mentor. 1 He thereafter moved to California for a postdoctoral fellowship at UCLA in the laboratory of Nobel laureate Paul D Boyer, followed by a first appointment at the University of California–Riverside. There, he was promoted over the years from assistant to full/distinguished professor and chairman of the department of biochemistry. His scientific career was fully devoted to virtually all aspects of vitamin D. Tony Norman was not only a very original hard‐working scientist; he was also a very successful mentor. Two recently published “In Memoriams” provide further details about his career. 2 , 3 Fig 2
Plaque given to the Norman family on behalf of the Vitamin D Workshop at a commemorative service at the University of California, Riverside, September 2019.

Tony Norman was acutely aware of the importance of sharing scientific data with the whole world to promote the exchange of new information and ideas and to stimulate international collaboration. Therefore, he initiated a first small “workshop on vitamin D" in 1973 in Frankfurt (Germany), rapidly followed by a much larger meeting in Wiesbaden (Germany) in 1974. Thereafter, the vitamin D workshops were organized every 3 years, alternatively in North America and Europe. Because of the rapid expansion of vitamin D research, annual workshops were organized from 2012 onwards. The specific scientists responsible for the workshop organization varied over time, 2 , 3 but there is no doubt that Tony Norman was the leader, who took on the largest organizational burden of these meetings. Workshop attendance over time increased and exceeded 600 participants at the 8th Workshop in Paris (1991). After the 15th annual meeting in Houston (2012), the organization of the workshops was transferred elegantly to a rotating workshop executive committee, ensuring an efficient and equitable system for the administration of future workshops. The 23rd annual meeting (2020) was projected to be organized for the first time outside of North America or Europe—on Australia's Gold Coast. Unfortunately, the COVID‐19 pandemic prohibited the assembly of vitamin D scientists, leading to the postponement of this meeting until 2022.

Mark Haussler, Dan Bikle, Sylvia Christakos, JoEllen Welsh, and Roger Bouillon thought that a special issue of JBMR Plus on many aspects of vitamin D might well be a long‐lasting legacy to commemorate Anthony W Norman in concert with the spirit of his ideas about promoting science via international workshops and publications. Fortunately, the Editor‐in‐Chief of JBMR Plus immediately agreed to assume the responsibility for editing and publishing this special issue, with editorial assistance from the above‐mentioned initiators of this volume. Approximately 30 vitamin D research groups were invited to submit a manuscript and, not surprisingly, there was overwhelming enthusiasm to participate in this heartfelt endeavor. Many manuscripts were submitted and entered the peer‐review process of the Journal; the first series of manuscripts accepted for publication is now ready for inclusion in the inaugural edition of the special issue of JBMR Plus to appear in January 2021. Additional accepted articles will be published in subsequent regular issues of JBMR Plus, designated as part of the tribute to AW Norman. Ultimately, all of the tribute manuscripts will be published, in toto, as a compendium that can be saved in honor of Tony's impact on the vitamin D field.

The deputy editor and associate editors are indebted not just to the contributing authors. They also thank Editor‐in‐Chief Peter Ebeling as well as Jessica Downey, who tirelessly and superbly supervised this project, and Wiley for its support of this special issue that will forever memorialize the legend of Tony Norman as the ultimate vitamin D aficionado.

Bouillon R , Bikle D , JWelsh JE . In memoriam: AW Norman, the founding father of the vitamin D workshops. J Steroid Biochem Mol Biol. 2020 Jun;200:105610.
This is an open access article under the terms of the http://creativecommons.org/licenses/by/4.0/ License, which permits use, distribution and reproduction in any medium, provided the original work is properly cited.
Recommended articles
Effects of Osteoporosis on Bone Morphometry and Material Properties of Individual Human Trabeculae in the Femoral Head
JBMR Plus
Ten‐Year Simulation of the Effects of Denosumab on Bone Remodeling in Human Biopsies
JBMR Plus
Single‐Cell RNA‐Sequencing Reveals the Breadth of Osteoblast Heterogeneity
JBMR Plus
Formation Dominates Resorption With Increasing Mineralized Density and Time Postfracture in Cortical but Not Trabecular Bone: A Longitudinal HRpQCT Imaging Study in the Distal Radius
JBMR Plus
Reduction of Calciprotein Particles in Adults Receiving Infliximab for Chronic Inflammatory Disease
JBMR Plus
Diagnosis of Hypophosphatasia in Adults Presenting With Metatarsal Stress Fracture: Proof‐of‐Concept for a Case‐Finding Strategy
JBMR Plus
Impact of Tenofovir Disoproxil‐Induced Fanconi Syndrome on Bone Material Quality: A Case Report
JBMR Plus
Attitudes toward bone health among rural‐dwelling veterans identified as at risk of fracture: a qualitative analysis
JBMR Plus
A Distinct Variant of Pseudohypoparathyroidism (PHP) First Characterized Some 41 Years Ago Is Caused by the 3‐kb STX16 Deletion
JBMR Plus
R Scragg's and JD Slutyer's “Is There Proof of Extraskeletal Benefits From Vitamin D Supplementation From Recent Mega Trials of Vitamin D?”
JBMR Plus