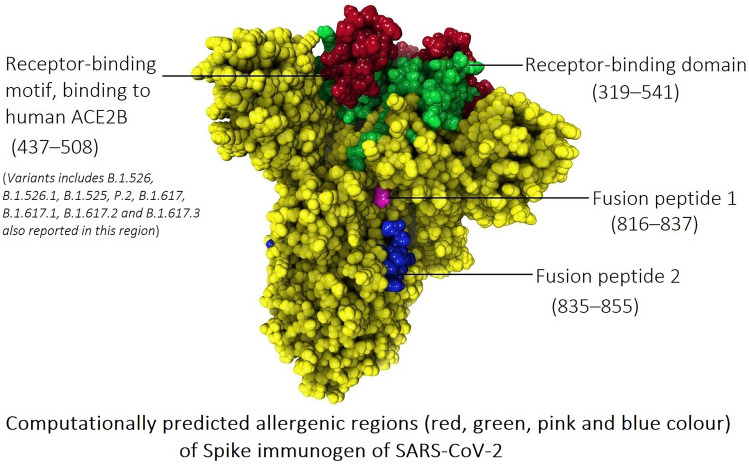 The demographic and clinical characteristics of the mRNA-1273 vaccine included participants (0.6–4.9%) having a history of chronic lung disease, cardiac disease, severe obesity, diabetes, liver disease, and human immunodeficiency virus infection. Moreover, the clinical trials of the BNT162b2 vaccine were conducted with a random selection of participants. On 28th December 2020, Banerji et al. [3] reported severe allergic reactions in some people who received the BNT162b2, and fewer people who received the mRNA-1273 vaccine. In addition, Castells and Phillips [4] noted that severe anaphylaxis reaction was observed in health care workers within 24 h after vaccination in the United Kingdom and Boston, United States [5]. Thus, the National center for immunization and respiratory diseases (NCIRD), Centers for disease control and prevention (CDC) advised health authorities of all countries to exclude anyone with a history of a severe allergic reaction associated with one of the vaccine components, especially PEG and PEG derivatives like polysorbates [6, 7].

Notably, allergens are mostly the proteins or glycoproteins or excipients present in the therapeutic molecules (e.g., vaccines) that promote or stimulate allergen-specific antibodies (i.e., immunoglobulins type E or IgE) in the human body [8]. These allergens react with IgE and cause allergic inflammatory responses. The crosslinking of IgE antibodies that are bound to the Fc epsilon RI (high-affinity IgE receptor) on the basophils and mast cells triggers degranulation in a short period. It results in the release of inflammatory mediators, namely histamine, prostaglandins and leukotrienes, proteases (G-protein-coupled receptors), and pro-inflammatory cytokines; and observation of major allergic symptoms (e.g., nausea, vomiting, reddening, rashes, laryngeal edema, wheezing, tachycardia, hypotension, and cardiovascular collapse) [8].

However, scientific personnel and medical professionals need to determine and understand the possible cause of allergic reactions, whether it by antigenic fragments or epitope (i.e., translated spike glycoprotein fragments) or excipients or stabilizer (PEG) in the vaccine molecules.

Glycoprotein-induced anaphylaxis: Many food allergens include egg, fish, milk, shellfish, and tree nuts that contain water-soluble glycoproteins, which are relatively stable to heat, acid, and proteolytic action [9, 10]. To provoke sustained immune response, the immunological (glycoprotein) molecule that binds specifically with the membrane receptor (i.e., antibody IgE) on T or B cell is known as an epitope. This epitope may be a linear (stable) or conformational (less stable) epitope. The linear epitopes are formed by the three-dimensional conformation adopted by the IgE paratope interaction of contiguous amino acid residues. Then, the IgE–allergen complex that binds with the receptor on mast cells or basophils causes allergic reactions such as the release of histamine, prostaglandins, and leukotrienes, proteases [11]. From the immunological point of view, after vaccination, these mRNA vaccines enter into the human cells and are translated into protein fragments (especially spike glycoprotein), which they present to the surface and are recognized by the human immune cells (e.g., APC—antigen-presenting cells). The APC present these spike protein fragments (epitopes) through MHC-II molecules on its surface. Further, the MHC-II–epitope complex was identified by the T helper cell receptor, which can raise the alarm and trigger the T helper cells-mediated immune response to release interleukins [12]. It involves the activation of allergen-specific B cells and the production of IgE antibodies (Fig. 1). Notably, nucleoside-modified mRNA (BNT162b2 and mRNA-1273) translated into fragments of spike glycoprotein of SARS-CoV-2, which possibly contains water-soluble glycoprotein fragments (allergen), triggers anaphylaxis reaction in some of the vaccinated individuals.

Stabilizer-induced anaphylaxis: BNT162b2 and mRNA-1273 vaccines contain two different stabilizing agents such as sucrose and PEG. In general, carbohydrate (sucrose) intolerance does not disturb the immune system and it may cause common allergic reactions, namely gastrointestinal disturbance. Another stabilizer PEG is non-toxic approved by the FDA in 1990. PEG is commonly used for surface components of lipid nanoparticles reported to have higher stability, circulation half-life, and reduced immunogenicity [13]. In general, mRNAs are short and easily degraded by the natural enzymes in the human body. Thus, the two vaccines included PEG–lipid nanoparticles coating to protect the mRNA in the circulation in the human body. Besides, studies of PEG encapsulated nanomedicine reportedly can cause pseudo-allergic reactions in experimental models [14, 15]. Similarly, after endocytosis, the mRNA free PEG in lipid nanoparticles floating on the cell surface interact with IgE antibodies (i.e. allergen) that bind into the FcƐR1 receptor on mast cells or basophils and can trigger immediate release of inflammatory and pro-inflammatory mediators that include histamine, prostaglandins, and proteases. Usually, the anaphylaxis signs and symptoms appear within a few minutes to one hour after exposure to allergic substances or antigens in the vaccine (Fig. 1).

The spike glycoprotein of SARS-CoV-2 contains key regions that include the receptor-binding domain (RBD), integrin-binding motif, an RB motif that binds to human angiotensin-converting enzyme 2 (ACE2B), two fusion peptides, and two heptad repeats. The spike glycoprotein (P0DTC2) sequence was retrieved from the Uniprot database. Allergenicity of the spike protein key regions was computationally predicted using two different tools AllerTOP v. 2.0 and AllergenFP v.1.0, which are effectively used for subunit vaccine design [16, 17]. The results from AllerTOP indicate that the RBD, receptor-binding motif, binding to human ACE2B (437–508), and two fusion peptides could be a probable allergen, while the results from both tools point to the receptor-binding motif of the spike protein to the host receptor ACE2B as a very probable allergen (Table 1). These results suggest that spike protein-based medication possibly induces an allergic reaction in the host system, likely due to the amino acid residues 437–508 sequence.

Further, the cohort study by the University of Oxford reported that two mRNA vaccines (BNT162b2 and mRNA-1273) and the AstraZeneca vaccine possibly cause cerebral venous thrombosis (i.e., anaphylaxis reaction) after 14 days of vaccination [19]. The mechanism of action was not reported in the article but there is a chance that spike proteins may elicit anaphylaxis reaction because of the major similarity of these vaccines is the presence of “spike protein immunogen”.

At present, vaccination programs have been initiated concurrently against COVID-19, but the debate is still going about the adverse effects and safety concerns raised by the vaccine. Moreover, the allergic reactions of the participants need to be identified or screened frequently by questionnaires and IgE testing before and after vaccination to monitor unpleasant adverse effects of the vaccine. In this concern, promising research outputs are needed to confirm the safety of the currently formulated mRNA vaccines.

Partial support of this work was provided by the Natural Sciences and Engineering Research Council (NSERC) of Canada (G.H.P. - Grant no. 216940); National Natural Science Foundation of China (DQ.W. -Grant no. 61832019, 61503244), the Ministry of Science and Technology of China (DQ.W.-Grant no.: 2016YFA0501703); G.S. and S.K. are grateful to the MITACS Global Research award, Concordia University for bridge funding from the Faculty of Arts and Science, the Office of the Vice-President Research and Graduate Studies, and Concordia International.

NCIRD (National Center for Immunization and Respiratory Diseases) (2020a) Interim Clinical Considerations for Use of mRNA COVID-19 Vaccines Currently Authorized in the United States. Released on December 30, 2020 https://www.cdc.gov/vaccines/covid-19/info-by-product/clinical-considerations.html