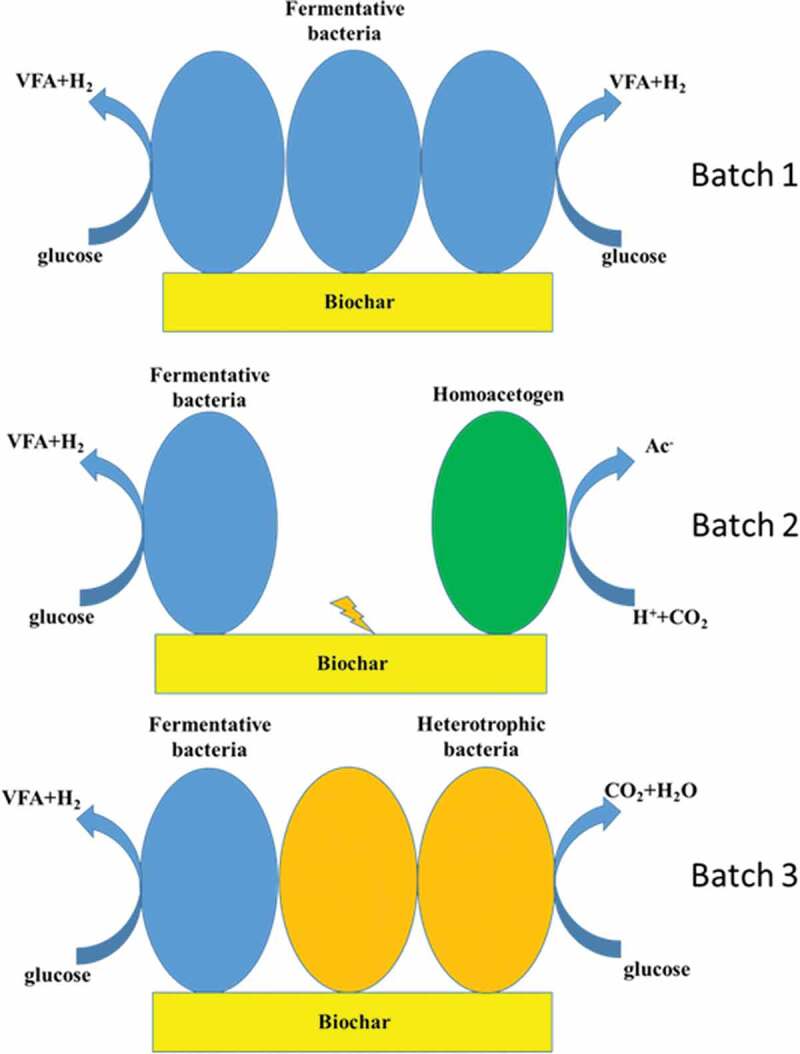 Acid-producing strains produce volatile fatty acids (VFA), hydrogen (H2) gas and carbon dioxide (CO2 ) gas from complicated organic molecules via fermentation reactions [1,2]. In fermentation, dark fermentation presents an effective pathway to obtain valuable chemicals from organic waste [3,4]. Enhanced fermentation process is of great practical interests [5,6]. The efficiency of dark fermentation can be enhanced by adding carbon-based materials, including biochar [7,8]. For instance, biochars that are added to fermenting broths can increase the yield of H2 from the organic wastes [9,10].

Lu et al. [11] added nine biochars to a microbial consortium and noted that biochars with excess functional groups and high crystallinity would lead to the preferential production of acetate over butyrate at the expense of the production of H2 and CO2 . The authors posited that homoacetogenesis was effective in the fermenting consortium as the biochar acted as an electron conductor for interspecies electron transfer between the acid producers and the homoacetogens. Lu et al. [12] subsequently performed sequential dark fermentation tests on a biochar-amended microbial consortium with repeatedly replenished glucose. The authors noted that the biofilm on the biochars preferentially produced acetate in the second batch fermentation but not in subsequent fermentation batches. Such an occurrence is of great practical interest for the long-term operation of biochar-amended fermentation to produce VFA.

The microbial communities in dark fermenting broths with or without the addition of biochar were monitored. The biased enrichment of the consortium with functional strains by the addition biochar was reported for the first time. This study reported data that providing in-depth understanding to the evolution of fermentation processes from organic substances based on microbial community information.

Four biochars, rice husk (R), white popinee (WP), bamboo (BB), and coconut (CT) were formed by slow pyrolysis at 550°C for 4 h in N2 atmosphere. The fermentative consortium that was collected from anaerobic digestion processes in Luxing Environmental Protection Corp. (Shangdong Province, China) was the original consortium used in this study. This consortium was similar to those used by Lu et al. [12], which was pretreated by boiling at 100°C for one hr for ease of comparison.

The original consortium was added to 100 mL serum flasks that were fed with 1070 mg/L glucose at pH 7 and 600 mg/L biochar to a working volume of 80 mL. Before each test, the headspace of the serum flask was purged with N2 gas. The fermentation tests were then performed at 36°C with intensive shaking and regular sampling. At the end of fermentation, the biomass to which biochars had been added was collected as sediment after 2 h of free settling. The supernatant was separately collected and the cells in the supernatants were regarded as being in suspended growth. Some of the biomass with the amended biochar samples were ultrasonicated at 50 W for 5 min in an ice bath and the suspensions were collected after another 2 h of settling. The fermentation tests were repeated four times, named as batch 1‒4, respectively, in this study. Batch 1 and batch 2 were used to simulate the early stage of fermentation process and Batch 3 and batch 4 were used to simulate the long-term fermentation process.

The genomic DNA of granule samples was extracted using a Fast DNA Spin Kit (MP Biomedicals, MA. USA). The bacterial gene sequence was amplified using ABI GeneAmp 9700 (ABI, USA) with Transstart Fastpfu DNA polymerase by primers 338F and 806R. Each sample was extracted and amplified in triplicate to ensure the quality of the obtained data. The amplified products were purified using an AxyPrep DNA extraction kit (Axygen, USA). The amplified genomic samples were used to construct an amplicon library, which was sequenced using Illumina PE250 (Illumina Inc., San Diego, USA). The sequences were then clustered into operational taxonomic units (OTUs) at 97% similarity and identified on the website of NCBI.

Figure 1(a–c) displays the flows of carbon when glucose was fed into the fermenting broths and those that arose from the production of VFA and CO2. The total VFA production rates and CO2 production rates varied with the species of biochar and declined as the number of fermentation batch increased. Figure 1(d) shows the flow of carbon from the biofilm. For biochars R and WP, the fed biomass firstly released carbon (batch 1); then the formed biofilm released a few carbons in batch 2; in batch 3, the biofilm grew by adsorbing a large amount of carbon. For biochars CT and BB, in batch 1, the fed biomass adsorbed carbon; then in batch 2, the biofilm released carbon, and in batch 3, the biofilm again adsorbed carbon in fermentation. The carbon flows in batch 4 were not analyzed in this study. Table 1 lists the genera of the most dominant strains, including Sporolactobacillus spathodeae , a gram-positive, facultatively lactate producer that can yield pyruvate from glucose [13]; Clostridium neunse, a gram-positive, obligate anaerobe for H2/CO2 /acetate/butyrate production [14]; and Clostridium paraputrificum , a gram-positive, anaerobe that can produce acetate/propionate from glucose [15]. These genera were identified in abundance in almost all studied samples. The second most dominant strains in some tested samples included Tissierella creatinine , an obligately anaerobic creatinine consumer [16]; Psychrobacter maritimus , gram-negative heterotrophic degrader [17]; Pseudomonas vernoii , a gram-negative, aerobic degrader, or anaerobic denitrifier [18]; and Sphingomonas echinoides , a gram-negative, heterotrophic organics degrader [19].

Abundances of the top 15 dominant strains identified from the consortium samples. The cladogram in Figure 3 reveals that the species Syntrophobacteraceae and Synergistetes were enriched in samples C1, C2, BB1, CT1, WP1. Pseudomonas sp. appeared in the biomass samples after three fermentation batches (CT3, BB3, R3). The dominant strains in R4, BB4, CT4 were Sphingomanadacae, Melainabacteria, and Obscuribacterales – totally other than those species that were from biomass on biomass. The dominant strain in R5, CT5, BB5 was Anaerolinae, indicating that the suspended cells comprised very different community structures from those with the fixed cells. Restated, the biochars were ‘biased’ cell carriers. The use of biochar to enhance process performance has high application prospects. The economy of fermentation processes counts on the overall efficiency from feedstocks to end products. The biochars are the products from other waste (solid waste, for instance) which can be supplied to fermenting reactors at low costs [26]. The application of biochars to field fermenting reactors is straightforward with only adding a side input stream with grinded biochar appended to the existing full-scale reactor will do. Owing to the low-cost nature, the applications of biochars to fermenting broths should be economically feasible to lower income countries and regimes.

The used biochars should not be regenerated and re-used. The used biochars could be discharged as part of the effluent that enters the next handling units, such as anaerobic digester [27] as electron conductors for DIET between different groups of bacteria or wastewater treatment reactor [28] as biofilm carriers with retained biomass. The biochars discharged with the final waste biomass can function as settling enhancer for biomass sedimentation [29], bulking agents for composting [30], or simply part of fertilizers to land applications [31].

• Dominant genera in biofilms attached on the biochars were identified.

No potential conflict of interest was reported by the authors.

. . Phylogenetic evidence that the gram-negative nonsporulating bacterium Tissierella (Bacteroides) praeacuta is a member of the Clostridium subphylum of the gram-positive bacteria and description of Tissierella creatinini sp. nov. Int J Syst Evol Microbiol. ;:.

. . Advances in production and application of biochar from lignocellulosic feedstocks for remediation of environmental pollutants. Bioresour Technol. ;:, pp.122030.