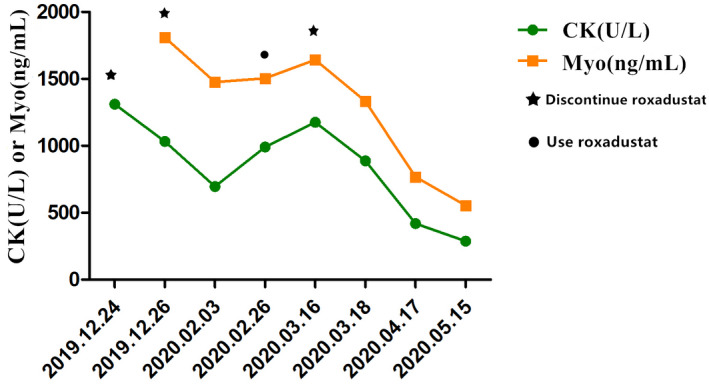 In this case, we share a case of one of our patients developed rhabdomyolysis after he was administered roxadustat to treat anaemia caused by chronic renal failure.

More than 1.2 million people died from chronic kidney damage (CKD) globally, in 2017. Anaemia is a common complication of CKD. Roxadustat is an oral hypoxia‐inducible factor prolyl hydroxylase inhibitor that stimulates erythropoiesis and regulates iron metabolism. Roxadustat is often used to treat anaemia caused by renal failure. Its adverse effects include high blood pressure, myocardial infarction, heart failure, high potassium, and dizziness; however, there are no reports about rhabdomyolysis associated with roxadustat.

Physicians should be alert about the occurrence of rhabdomyolysis when roxadustat is used.

A 54‐year‐old male patient presenting with abnormal renal function since 6 years, and tightness in the chest, and fatigue since 2 months was admitted to our hospital. He had a history of hypertension for 10 years and regularly took antihypertensive drugs (furosemide and arotinolo). He was found to have abnormal renal function 6 years ago; however, the details were unknown. In the past year, the patient developed oedema of the eyelids and lower extremities. In February 2019, the patient's blood creatinine reached 1848.5 µmol/L, blood urea reached 57.96 mmol/L, eGFR was 2.63 mL/min/1.73 m2 . The diagnosis was chronic kidney disease stage 5 and was initially treated with continuous renal replacement therapy (CRRT). The patient underwent catheterisation for peritoneal dialysis in March and regularly underwent peritoneal dialysis since then. The dialysis programme was as follows: 1.5% peritoneal dialysate 5 L × 2 automated peritoneal dialysis (APD), and 1.5% peritoneal dialysate 2 L × 3 daytime ambulatory peritoneal dialysis (DAPD), and the urea clearance index (KT/V)was 1.97/w. In addition, the patient was treated for anaemia. The specific treatment plan was as follows: folic acid tablets 10 mg three times a day, oral, polysaccharide iron complex 0.15 once a day, oral, erythropoietin (EPO) 10 000 µ once a week, subcutaneous injection, and on August 27, 2019, the EPO was adjusted to 12,000 u. However, despite the use of erythropoietin, folic acid, and iron treatment the patient's hemoglobin level did not increase beyond 9.6 g/dL. He was then switched to roxadustat instead of EPO in September 2019 and his hemoglobin increased to 11.3 g/dL. The remaining treatment plan for anaemia remained unchanged: folic acid tablets 10 mg three times a day, oral, polysaccharide iron complex 0.15 once a day oral. There was no other abnormality in the rest of the period. In December 2019, the patient developed weakness of the lower limbs with myalgia. The serum creatine kinase (CK) and myoglobin (Myo) levels were significantly increased (CK: 1032 U/L, Myo: 1809 ng/mL) on December 24, 2019. Suspecting rhabdomyolysis, roxadustat was discontinued on December 24, 2019, after which the patient's lower limb fatigue and myalgia symptoms improved and his hemoglobin level decreased. The patient later developed symptoms of anaemia such as tightness of the chest and fatigue. After administering EPO treatment, the symptoms did not improve significantly and his hemoglobin decreased to 6.2 g/dL. He was administered roxadustat twice again, to treat the anaemia. During this time, the patient experienced limb pain again, and the CK and Myo levels significantly increased. Roxadustat was discontinued after admission to the hospital. On admission to the hospital his clinical parameters were as follows: body temperature 37.1°C, heart rate 78 beats per minute, blood pressure 165/107 mmHg, mild oedema of the eyelids and lower extremities, blood albumin 37.5 g/dL, serum ferritin 118.57 ng/mL, urea 40.24 mmol/L, creatinine 1237.6 mmol/L. The relative serum levels of CK, Myo, and other indicators of patients are shown in Figure 1. The change in serum hemoglobin with time and the treatment plan is shown in Figure 2. At present, the patient stopped roxadustat for more than 2 months. The symptoms of myasthenia and pain in both lower extremities have improved significantly, and the levels of CK and Myo have decreased significantly in recheck. After that, patients were followed up once a month. Patient's myasthenia and pain symptoms have been relieved and there is currently no discomfort about rhabdomyolysis. Roxadustat is often used to treat anaemia caused by renal disease, and its adverse effects include high blood pressure, myocardial infarction, heart failure, etc Clinically, different patients develop different complications, but there are no reports about rhabdomyolysis because of roxadustat. In our clinical work, this patient has led us to consider the causes and possible mechanisms of rhabdomyolysis following the use of roxadustat in the treatment of renal anaemia.

More than 1.2 million people died from CKD globally, in 2017. 1 Anaemia is a common complication of CKD and is associated with an increased risk of death and complications. 2 , 3 Anaemia is defined as a hemoglobin level of <10.0 g/dL. 4 , 5 Anaemia because of kidney disease is caused by decreased levels of renal EPO; in addition, some toxic substances in plasma interfere with EPO and reduce its lifespan when the renal function declines because of various kidney diseases. 6 Clinical practice guidelines recommend the treatment of anaemia, and there is evidence that the treatment of anaemia can improve the quality of life, reduce the risk of cardiovascular disease, and improve the clinical outcome. 2 , 7 , 8 The treatment of anaemia often includes the administration of iron and erythropoiesis‐stimulating agents (ESAs) in patients with CKD. However, the safety and effectiveness of ESA treatment have been debated. 9 , 10 Studies have shown that the oxygen‐sensing pathway and inflammation are the main mechanisms leading to CKD anaemia, and they affect iron metabolism and EPO production. HIF pathway has a variety of effects: upregulating endogenous EPO and EPO receptor, promoting EPO production in the physiological range 11 ; upregulating Dcytb and DMT1 directly promoting iron absorption 12 ; increasing the expression of transferrin and transferrin receptor, directly promoting the generation of plasma iron into bone marrow red blood cells 13 ; downregulating the level of iron, indirectly improving the absorption and transport of iron. 14 Roxadustat is an oral hypoxia‐inducible factor prolylhydroxylase inhibitor that stabilises HIF‐α subunits and then increased HIF transcriptional activity. Furthermore, this increase in transcription activity leads to the functional activation of early‐response target genes which encodes proteins such as erythropoietin, erythropoietin receptor, enzymes of heme biosynthesis, and these proteins can promote iron absorption and transport, which results in coordinated erythropoiesis. 15 In CKD patients on dialysis or not on dialysis, roxadustat has a therapeutic effect on anaemia. However, there are some adverse effects. The known adverse effects of roxadustat include upper respiratory tract infection, high blood pressure, high potassium, chest discomfort, myocardial infarction, heart failure, dizziness, etc; however, there is no mention of rhabdomyolysis. In our case report, the patient developed weakness in the lower extremities and muscle aches after using roxadustat, and the levels of serum CK and Myo increased. Clinically, most authors diagnosed rhabdomyolysis based on CK levels five times the upper limit of normal levels (>1000 U/L), and the most symptoms commonly included were muscle pain and muscle weakness. 16 Based on the clinical manifestations and laboratory tests, the patient was diagnosed with rhabdomyolysis. Rhabdomyolysis is caused by the rapid breakdown of skeletal muscle fibres, releasing potentially toxic cell contents into the systemic circulation. 17 , 18 There are numerous and diverse causes of rhabdomyolysis. These causes can be acquired and inherited, as well as caused by hypoxia, physical, chemical, and biological. 19 For example, Crush syndrome, intense muscle activity, cocaine, and heroin may cause rhabdomyolysis. 16 Amongst the chemical causes, it includes prescription and non‐prescription drugs, illegal drugs, inorganic toxins, and electrolyte abnormalities. Common drugs are psychiatric medications (eg, quetiapine, aripiprazole), lipid‐lowering drugs (such as statins), antiretroviral medications (antiretroviral medications), anaesthetics/paralytics (eg, Succinylcholine, propofol), etc. 19 Before the use of roxadustat, the patient has been treated with statins to lower lipids without interruption, but did not experience any clinal symptoms and serum changes associated with rhabdomyolysis. After the first use of roxadustat, the patient experience clinal symptoms and serum changes associated with rhabdomyolysis when using roxadustat with the use of atorvastatin. However, the symptoms of rhabdomyolysis were alleviated, and the levels of serum creatine kinase and myoglobin were slowly decreased when the patient stopped using roxadustat for the first time and continued to use the same dose of atorvastatin for lipid‐lowering treatment. In this case, based on the patient's medical history and the changes in serum CK and Myo levels after the use and discontinuation of roxadustat, and exclude other drugs causing rhabdomyolysis, we believe that the cause of rhabdomyolysis might be related to roxadustat. But the specific mechanism remains to be studied.

The authors declare that there are no conflicts of interest.

All datasets are available from the corresponding author upon reasonable request.

Del VL , Locatelli F . An overview on safety issues related to erythropoies is stimulating agents for the treatment of anaemia in patients with chronic kidney disease. Expert Opin Drug Saf. 2016;15:1021⁃1030.

Tweets
Follow
Tweets by ResearchPad
https://www.researchpad.co/tools/openurl?pubtype=article&doi=10.1111/ijcp.14011&title=A case report of rhabdomyolysis caused by the use of roxadustat in the treatment caused by renal anaemia&author=&keyword=&subject=Short Report,Short Reports,Nephrology,