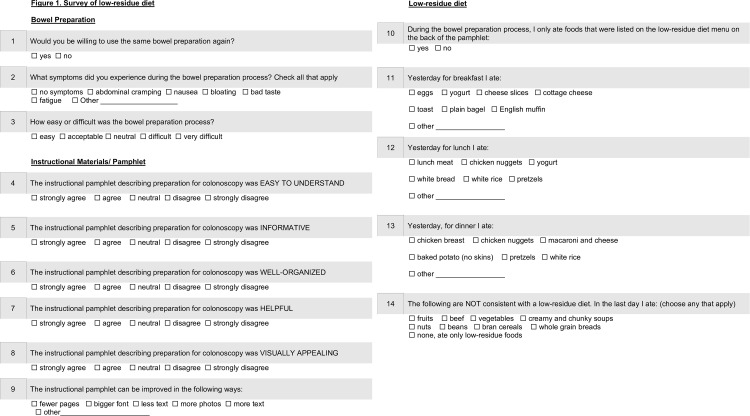 Screening prevents deaths from colorectal cancer, but only 63% of Americans aged 50 years and older are up-to-date on screening [1]. A major barrier for individuals considering undergoing a colonoscopy is the bowel preparation process [2]. Research has shown that a low-residue diet (LRD) is a promising alternative to the conventional clear liquid diet used to prepare for colonoscopy [2, 3]. One study found that patients who consume a limited LRD before colonoscopy achieved a bowel preparation quality that was noninferior to patients on a strict clear liquid diet [4]. Furthermore, polyp detection rates, patient tolerance, and patient acceptance were similar between the two groups [4]. In other studies, patients on a LRD reported significantly higher satisfaction with bowel preparation medication, diet, and the overall preparation process [2]. Patients may also be more willing to undergo the preparation and repeat the process [3].

In November 2016, a patient education pamphlet that included a LRD menu was introduced at the VA New York Harbor Health Care System (NYHHCS) Manhattan Medical Center. This replaced the previous bowel preparation instructions, which used a clear liquid diet. Compared to historical controls who underwent a clear liquid diet, those who used the LRD had a statistically non-significant increase in the proportion of individuals with adequate bowel preparation (82% vs. 86%), although the proportion with a maximum Boston Bowel Preparation Scale (BBPS) score of 9 was significantly increased (27% vs. 41%) [9]. In this study, our objectives were to identify risk factors associated with inadequate bowel preparation and to assess patient satisfaction and compliance with the LRD.

This study was approved by the Veterans Affairs New York Harbor Health Care System Institutional Review Board (#1651) and included both a chart review and questionnaire component. Prior to colonoscopy, all patients were assessed in the gastroenterology clinic and received one-on-one teaching about the bowel preparation from a registered nurse or nurse practitioner. All patients received a copy of the color educational pamphlet that formed the basis of the teaching, which included a LRD menu. The standard bowel preparation was a split-dose 2L polyethylene glycol-based solution.

To examine factors associated with inadequate bowel preparation, we conducted chart reviews on a consecutive subset of outpatient colonoscopies performed between February 2017 and April 2018 at the Manhattan VA. Informed consent was waived by the Veterans Affairs New York Harbor Health Care System Institutional Review Board. Using an automated query that was supplemented with manual data extraction, we obtained information on demographics, medical risk factors, medications, endoscopic findings, and histologic results. An adequate bowel preparation was defined as BBPS ≥2 in each colonic segment [10].

To examine patient satisfaction and compliance with the LRD bowel preparation, we administered a brief, 14-item anonymous questionnaire to patients undergoing outpatient colonoscopy at our hospital from March to August 2018. As the questionnaire was primarily intended for quality improvement, its content validity was assessed internally by the study team, but pilot testing was not performed. All patients were eligible to participate. The questionnaire was optional, and consent was implied if the patient chose to participate. Separate oral or written consent was not obtained. The questionnaire addressed the following topics: 1) satisfaction with the LRD bowel preparation, 2) satisfaction with the patient education pamphlet, and 3) compliance with the LRD (Fig 1). The results of the questionnaire portion of the study (n = 251) are shown in Table 3. Overall, patients expressed high satisfaction with the LRD bowel preparation. Eighty-four percent of patients were willing to repeat the bowel preparation, 85% found the process easy or acceptable, and 44% did not experience any symptoms during the preparation process. Self-reported compliance with the diet was also high, with 78% of patients indicating full adherence. The most commonly consumed LRD foods included the following: breakfast eggs (55%), lunch meat (35%), chicken breast for dinner (32%), white bread for lunch (27%), baked potato for dinner (15%), and white rice for dinner (14%). Of the patients who were not compliant with the diet, the most commonly eaten food items were fruits (5%), beef (5%), and creamy chunky soups (3%). The most common symptoms experienced with bowel preparation were bad taste (20%), abdominal cramping (17%), and bloating (17%).

In this single-center study of veterans undergoing bowel preparation with a LRD, we found 94% adequate bowel preparation as well as high levels of patient-reported satisfaction and compliance. Since veterans have a higher prevalence of obesity and smoking than the general population [6, 7], and these comorbidities have been previously associated with poor bowel preparation, our results suggest LRD can be successfully implemented even in older patients with multiple comorbidities.

We found that higher BMI was the only independent predictor of poor bowel preparation with LRD. Existing literature examining the relationship between BMI and bowel preparation quality have shown conflicting results. Our findings are consistent with other retrospective studies that suggest overweight or obese individuals are more likely to have suboptimal bowel preparation. Borg et al found that individuals with BMI ≥25 kg/m2 were more likely to have inadequate bowel preparation [12], and Fayad et al came to a similar conclusion for persons with BMI ≥30 kg/m2 using split-dose bowel preparation [13]. Both studies used the Aronchick scale, which is a qualitative scoring system that may be subject to greater interobserver variability than the quantitative BBPS score. On the other hand, a recent large prospective study of 1314 patients that used a split-dose regimen and the modified Aronchick scale did not identify a correlation between higher BMI and bowel preparation [14]. A smaller prospective study of 99 patients that used a low-volume sodium picosulfate preparation and the BBPS score found similar results [15]. Our study is the first to identify obesity as a predictor for poor bowel preparation using a LRD. The discrepancy in published results may be attributable to differences in the bowel preparation regimens as well as instructions provided to study participants. Given that obesity is an established risk factor for colorectal cancer and colonoscopy with adequate bowel preparation protects against colorectal cancer, additional research to define this relationship is needed.

A number of other factors—including age, smoking, diabetes, and opioid use—have been previously identified as predictors of inadequate bowel preparation using a clear liquid diet [12–14, 16]. That these factors were not identified as significant predictors is likely due to several limitations of our study. First, most patients in our study were above the age of 60, which restricted the spectrum of age for the analysis and could have affected the results. Second, because we used administrative codes to extract clinical information, missing or incorrectly coded data may have influenced the findings. Third, the number of patients with poor bowel preparation was smaller than anticipated. Therefore, we were slightly underpowered to evaluate all the variables of interest in the regression model. However, the small proportion of inadequate bowel preparation observed supports the clinical utility of the LRD. A fourth limitation is that the patient satisfaction portion of the questionnaire relate to a bowel preparation process that includes the LRD rather than the LRD in of itself. We chose to ask a single question about bowel preparation in order to minimize questionnaire length and maximize clinically relevant responses, since the diet is an integral component of the bowel preparation process.

The effectiveness of colonoscopy is dependent on high-quality bowel preparation, which in turn depends on patient comprehension and adherence to the preparation process. Most patients in our study were satisfied with our educational pamphlet and LRD overall, although the visual appeal of the pamphlet scored poorly and improving the design may boost future adherence. Many educational interventions have been trialed to improve preparation quality, including pamphlets, videos, and telephone calls. A systematic review found that the vast majority of these interventions led to statistically significant improvements in bowel preparation, but since most were conducted at single centers generalizability to other settings may be limited [17]. Although our study was also conducted at a single center, it is part of the largest integrated healthcare system in the US and therefore may be more applicable to the nine million veterans enrolled in the VA each year. Nevertheless, more research is needed to determine the most effective patient education approach, and the optimal method will likely vary based on local patient demographics and availability of resources.

Our study provides further evidence that a bowel preparation using LRD is effective and well-accepted, even in a population of older veterans with multiple comorbidities. The relationship between higher BMI and poor bowel preparation, if confirmed, may warrant targeted interventions for the increasing number of overweight and obese individuals. Patients reported high satisfaction and compliance with the LRD, which was introduced as part of an educational pamphlet. Future work is needed to improve the visual appeal of the educational pamphlet and further emphasize the importance of adhering to the LRD.