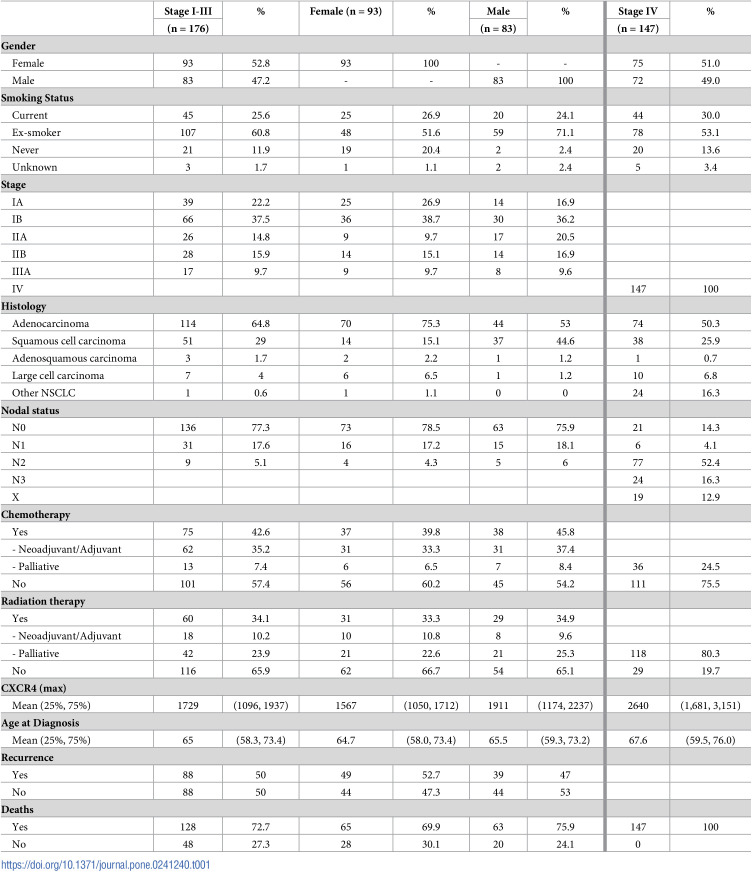 Cytokines and their receptors have been implicated in tumor progression [1–3], and evidence suggests that the expression of some cytokine receptors increases with cancer evolution [4]. The cytokine receptor CXCR4 and its ligand stromal cell derived factor-1 (SDF-1) can activate signaling through the phosphoinositol-3-kinase (PI3K) and mitogen activated protein kinase (MAPK) pathways, and have been implicated in cell migration, invasion and angiogenesis [5–8]. Furthermore, the CXCR4/SDF-1 axis may be involved in regulating development of organ-specific metastases [5].

A retrospective analysis of stage I-III NSCLC patients (AJCC 7th edition) diagnosed at the Tom Baker Cancer Centre (Calgary, Canada) between 2003–2006 was undertaken. Patient characteristics, diagnostic, treatment and outcome data were collected through chart review and kept in the Glans-Look Lung Cancer (G-LLC) database. Stage IV patient data were also collected from the G-LLC database. All patient data and tissue samples were de-identified, and patient records and tissue samples were accessed for analyses from August 2009 to July 2010. Research ethics board (REB) approval was obtained from the Health Research Ethics Board of Alberta Cancer Committee (HREBA-CC) prior to study initiation, and research was completed in accordance with the Tri-Council Policy Statement on Research with Human Subjects.

Tissue microarrays (TMA) were generated from formalin-fixed paraffin-embedded samples from archived biopsy or surgical specimens. Representative cores (0.6mm) were taken in triplicate from each specimen. Fluorescent immunohistochemical staining (IHC), quantification and analysis of CXCR4 expression were completed as previously described by Otsuka et al . [14]. Briefly, 5 μm sections were cut from TMA blocks and stained using a 1:500 dilution of anti-pan-cytokeratin mouse monoclonal antibody (Dako) and a 1:25 dilution of an anti-CXCR4 rabbit monoclonal antibody (clone UMB2, Biotrend, Köln, Germany) to identify tumor cells and CXCR4 expression, respectively [14]. Images were acquired using filters for DAPI (nuclear compartment), Cy3 (cytokeratin-positive tumor cells and the cytosolic compartment), and Cy5 (CXCR4 biomarker). Nuclear and cytomembranous CXCR4 expression was characterized and CXCR4 levels were expressed as a tumor-specific automated quantitative analysis (AQUA) score, which represented the maximum signal intensity per tumor area [14]. A definite AQUA score cut-point to differentiate between low vs. high CXCR4 expression was not identified; therefore, mean CXCR4max expression, in addition to ranges of AQUA scores were utilized to compare the level of CXCR4 expression between groups.

Survival outcomes included recurrence, recurrence-free survival (RFS), defined as the time from the end of treatment to recurrence or death; and overall survival (OS), defined as time from diagnosis to death from any cause. CXCR4 expression and survival outcomes were analyzed using Kaplan-Meier curves, Cox proportional hazards (PH) and multi-state models (MSM) [18], which accounted for the effect of treatments received following recurrence. CXCR4 expression levels were compared between groups using a two sample t-test. Statistical analyses were completed using R version 3.5.1 software.

Frequency and percent of patient and tumor characteristics at diagnosis for all patients and by gender.

An updated analysis of 147 stage IV patients (75 females, 72 males) identified in the G-LLC database was also performed with a detailed summary of their characteristics also shown in Table 1.

Of all stage I-III patients, 62 patients (35.2%) received neoadjuvant/adjuvant chemotherapy, while 18 (10.2%) received adjuvant radiation. Of the 88 patients who recurred, 29 (33.0%) received systemic treatment (chemotherapy, targeted therapy or immunotherapy) post-recurrence, and 54 (61.4%) received radiation (Table 2). The treatments received after recurrence was similar across genders.

Treatments received after recurrence for all patients and by gender. The nuclear and cytomembranous components of CXCR4 staining were both higher in stage IV patients compared to early stage patients (p<0.05), and this was consistent across genders. Interestingly, males with early stage NSCLC had higher nuclear expression of CXCR4 than females (mean of 1911 ±1107 vs. 1567 ±1040, p = 0.049). Likewise, nuclear CXCR4Max expression levels >2500 were more frequent in males compared to females (18.1% vs. 10.7%) in early stage NSCLC patients.

Two patients had both resected and recurrent metastatic tissue available—the female had higher CXCR4 expression (both nuclear and cytomembranous) in the stage IV than in the early stage sample, whereas the male patient’s CXCR4 expression was similar, irrespective of stage (Fig 3). Both patients recurred, with the male recurring locally and the female developing distant metastatic recurrence. In this early stage patient cohort, CXCR4 expression did not independently predict for recurrence, RFS or OS (Table 3). Similarly, there was no differential predictive effect by gender or following recurrence for death in the multi-state model (Table 3). On Kaplan-Meier analysis, no gender difference in RFS (p = 0.60) or OS (p = 0.30) by gender and CXCR4 expression groups based on median splits were observed and median survival times were similar (RFS: male 52.8 months vs. female 54.5 months, OS: male 80.9 months vs. female 89.0 months; Fig 4 top and bottom panels, respectively). However, patients of either gender with CXCR4Max expression greater than the median split appeared to have a trend towards worse RFS and OS starting approximately 3 years from diagnosis. When stage IV patients were included with the early stage patients in a multivariable adjusted Cox PH model, CXCR4 expression did not independently, or synergistically with gender or stage, predict for OS (HR = 1.0001, p = 0.32). Our cohort included a small number of patients with stage IIIA disease, no stage IIIB patients, and only 9 patients with N2 disease. Consequently, analysis of the impact of CXCR4 expression on survival outcomes in stage III patients was limited. On multivariable survival analysis, we found no association between CXCR4 expression and lymph node status in early stage patients; however, our study was limited by a small number of node-positive patients and a robust analysis could not be completed. A plausible explanation is that the resected stage III cases represent those with minimal presurgical evidence of nodal disease based on imaging and mediastinal staging. In such cases, the extent of metastatic capability is likely not as well developed as in cases where disease has metastasized to distal organs.

A meta-analysis by Liang et al . found an association between CXCR4 overexpression and lymph node metastasis, distant metastasis, and OS [15]; however, the patient population was quite heterogeneous (i.e. included stage I-IV patients as well as small cell lung cancer patients), making comparison to our patient population difficult. It is possible that the impact of the CXCR4/SDF-1 axis is more prominent in patients with lymph node metastasis, or after recurrence, as this pathway is implicated in cell migration, invasion, and possible homing to different organ sites of metastases [4, 7, 8, 19]. Interestingly, the majority of stage IV patients (n = 107, 72.8%) in our study had node-positive disease, suggesting a possible relationship between higher CXCR4 levels in stage IV patients and development of lymph node and distant metastases. Further studies should be considered to evaluate the association between CXCR4 expression (nuclear vs. cytomembranous) and development of organ-specific sites of metastases.

Otsuka et al . previously reported a gender-specific difference in survival, with worse outcomes in females with high CXCR4 expression [14]. We did not observe a difference in survival outcomes based on gender; however, we did note higher nuclear CXCR4 expression in males compared to females in the early stage setting. Previous studies have shown that nuclear expression of CXCR4 is associated with better survival than cytomembranous expression, and this might be due to less tumor-promoting effects of the receptor with nuclear localization compared to when the receptor is in the cytomembranous compartment [8, 16]. It is possible that the greater nuclear expression noted in males with early stage NSCLC could account for the different survival outcomes between genders. In addition, differences in nuclear vs. cytomembranous expression could lead to different risks for development of recurrent or metastatic disease.

There are limitations in the current study. Firstly, we are limited by the retrospective nature of the analysis; however, our data collection was comprehensive and included a substantial number of early stage patients in comparison to other published studies evaluating CXCR4 expression in lung cancer patients. Secondly, the small number of stage III patients (with no stage IIIB patients), as well as few node-positive patients in our population, did not allow for a robust analysis of more advanced stage III disease. However, despite this, we were still able to show an increase in CXCR4 expression with stage progression. Finally, there was limited data on sites of metastases in patients who recurred; therefore, we were unable to evaluate for an association between CXCR4 expression and development of organ-specific sites of metastases.

Targeted therapies have been developed to inhibit the CXCR4/SDF-1 axis, and have been evaluated in various cancers [2, 20–22]. Despite disappointing results in trials utilizing anti-CXCR4 strategies [23, 24], the CXCR4/SDF-1 axis warrants further study to define its role in tumor progression, recurrence, and metastasis, as well as elucidate the impact on the tumor microenvironment. Furthermore, the function of the CXCR4/SDF-1 axis in immune biology suggests a potential therapeutic role for anti-CXCR4 strategies with immunotherapy [25]. Trials are ongoing to evaluate this combination (NCT03193190, NCT03281369, NCT03337698).

CXCR4 expression is significantly lower in stage I-III than in stage IV NSCLC patients. Its expression does not predict survival outcomes in early stage patients, and no gender difference was identified between CXCR4 expression and survival. Mechanisms by which CXCR4 expression increases during lung carcinogenesis warrant further exploration and testing in clinical trials.

, , , , , , The expression of functional chemokine receptor CXCR4 is associated with the metastatic potential of human nasopharyngeal carcinoma. Clin Cancer Res 2005;11:4658–4665.

, , , , , . Stromal cell derived factor-1: its influence on invasiveness and migration of breast cancer cells in vitro, and its association with prognosis and survival in human breast cancer. Breast Cancer Res 2005;7: R402–R410

, , , . Characterization of a murine model of metastatic human non-small cell lung cancer and effect of CXCR4 inhibition on the growth of metastases. Oncoscience 2015;2(3):263–271.

, , , , , , Potential Role of CXCR4 Targeting in the Context of Radiotherapy and Immunotherapy of Cancer. Front Immunol. 2018;9:3018
This is an open access article distributed under the terms of the Creative Commons Attribution License, which permits unrestricted use, distribution, and reproduction in any medium, provided the original author and source are credited.
Recommended articles
Translation and validation of caring behaviors inventory among nurses in Iran
PLoS ONE
Implementation of the Ebola Virus Persistence in Ocular Tissues and Fluids (EVICT) study: Lessons learned for vision health systems strengthening in Sierra Leone
PLoS ONE
Using Assessment Design Decision Framework in understanding the impact of rapid transition to remote education on student assessment in health-related colleges: A qualitative study
PLoS ONE
Clinical utility of the BioFire FilmArray Blood Culture Identification panel in the adjustment of empiric antimicrobial therapy in the critically ill septic patient
PLoS ONE
Dissemination of COVID-19 in inland cities of Northeastern Brazil
PLoS ONE
Balanced carbohydrate ratios are associated with improved diet quality in Australia: A nationally representative cross-sectional study
PLoS ONE
Variation of virulence of five Aspergillus fumigatus isolates in four different infection models
PLoS ONE
Clinical and bioethical implications of health care interruption during the COVID-19 pandemic: A cross-sectional study in outpatients with rheumatic diseases
PLoS ONE
Gender inequality among medical, pharmaceutical and dental practitioners in French hospitals: Where have we been and where are we now?
PLoS ONE
Scoping review of the characteristics assessed by vulnerability indices applied to people experiencing homelessness
PLoS ONE