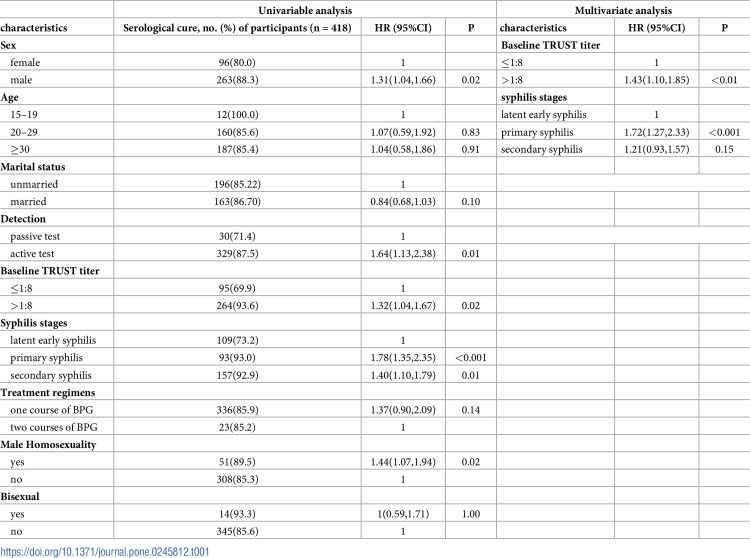 Syphilis is a common infectious disease worldwide. Serological monitoring is important for syphilis management. We currently know little about the characteristics of this seronegative response. The aim of this study was to explore the factors associated with serological cure after treatment of early syphilis.

Syphilis is a sexually transmitted disease caused by Treponema pallidum , and is spread mainly through direct lesion contact [1]. The disease can progress over years without treatment through a series of clinical stages and lead to irreversible neurological or cardiovascular complications.

Although Treponema pallidum can be treated easily and inexpensively with antibiotics [2], syphilis remains a prevalent disease worldwide. More than 5 million new cases of syphilis are diagnosed every year in the world [3,4]. In China, syphilis has imposed an increasing burden in the past decade. The average syphilis incidence showed significantly increasing trends from 2004 to 2013 and fast rates of growth with annual percentage changes of 16.3% [5]. In 2018, the syphilis incidence increased to 35.6 cases per 100,000 [6].

Recent reports on the incidence of syphilis in Guangdong Province and Shenzhen District reported 52.55 cases [7] and 64.04 cases [8] per 100,000 people, respectively. Shenzhen, which is located in Guangdong Province of southern China, just north of Hong Kong, is the first special economic zone in China. However, in Shenzhen, syphilis showed a significant rise and an obvious spatial distribution [9–11]. The burden of syphilis in Shenzhen was large and syphilis control should be regarded as a public health priority.

To consolidate prevention, treatment and management to better control syphilis, in April 2011, Nanshan District in Shenzhen City, launched the Syphilis Convergence Case-management Program. All the health organizations in the district were asked to refer seropositive syphilis cases to the STD clinic, Department of Dermatology and Venereology in Nanshan Center for Chronic Disease Control, which provided centralized management, standardized treatment and regular serologic follow-up. In the process of running the program, benzathine penicillin G (BPG) is recommended for early syphilis treatment, which refers to latent early syphilis, primary syphilis and secondary syphilis infections with Treponema pallidum within 2 years and patients’ response to therapy is assessed based on changes over months of serological test titers [15,16].

Serological assays to quantitatively detect nontreponemal antibodies are the mainstay for evaluating the effectiveness of treatment. The toluidine red unheated serum test (TRUST) is a procedure that labels the antigen with toluidine red particles [17], which is mostly used in serum tests for laboratory diagnosis of syphilis. Correct understanding and appropriate interpretation of the serological response following therapy are critical to guide clinical practice regarding the needs for additional follow-ups or therapy. However, we still know little about the serological response and the associated factors that predict the serological response after syphilis treatment have not been well defined in this area. As immune differences and HIV drugs have some effects on the outcome of HIV-positive and HIV-negative syphilis patients, the aim of this study was to estimate the rates of serological cure after treatment with BPG and identify the factors related to the serological response among HIV-negative patients with early syphilis.

We performed a retrospective cohort study and data from patients who were diagnosed with early syphilis in our clinic between 2011 and 2019 were obtained in August 2020 with application to syphilis studies. All patients were told that their medical records would be used for research when they were recruited in the program and received the first treatment. Informed written consent was obtained from the patients who agreed to participate in this study, and their participation was voluntary. The patients were recruited into the study when they met the following criteria: (1) being diagnosed with early syphilis; (2) having enough clinical records, such as demographical characteristics, baseline TRUST titer and disease stages; (3) not having an allergy to penicillin after receiving treatment with benzathine penicillin G (BPG); (4) being negative for human immunodeficiency virus (HIV); and (5) completing at least one serological follow-up visit after treatment. Simultaneously, patients with the following conditions were excluded: severe heart, liver and kidney diseases; malignant diseases; chronic infectious diseases, such as tuberculosis, leprosy, and viral hepatitis; systemic autoimmune diseases, such as lupus erythematosus, rheumatoid arthritis and dermatomyositis; and severe mental illness.

Early syphilis diagnosis, treatment and follow-up were in compliance with the 2014 national guidelines in China [16]. The patients were finally diagnosed with early syphilis according to their epidemiological history, clinical signs and symptoms, and TRUST/TPPA results. Non–penicillin-allergic participants without HIV were treated with BPG in one course (BPG 2.4 million units weekly for 2 weeks as one course). Follow-up was initiated after treatment, and nontreponemal test titers were obtained to evaluate patients’ serological response at 3, 6, 9 and 12 months in the first years and 18 and 24 months in the second year.

The primary outcome was the response to therapy, as determined by the changes in the TRUST titers after treatment. All the participants were recruited in the cohort and were followed periodically. Serological cure was defined as either a negative TRUST test or ≥4 fold decreased titer after treatment during follow-up.

Patient information was recorded in a database using Excel and was analyzed using Stata16. Descriptive statistics were used to describe the baseline characteristics and the serological conversion status. The endpoint was defined as the outcome of the TRUST test becoming negative or a ≥4 fold decreased titer. If the endpoint was not reached at the end of the study, then the patient was defined as censored. If someone was lost to follow up, then the final follow-up result was used. Univariable and multivariate Cox proportional hazard analyses were performed to analyze the predictors of serological cure after treatment. The p value equal to or less than 0.05 was considered as statistically significant.

Ethics approval and consent to participate

This study was approved by the Institutional Ethics Committee of Nanshan Center for Chronic Disease Control and was in compliance with the national legislation and the Declaration of Helsinki guidelines (LL20200001). Informed written consent was obtained from the participants who agreed to participate in this study, and their participation was voluntary.

Characteristics of the study population

Univariable and multivariate Cox proportional hazard analysis of the characteristics of patients who achieved serological cure.

A multivariate analysis was then conducted using all the related variables described above. The results (Table 1) further confirmed that having a baseline TRUST titer >1:8 was associated with an increased probability of serological cure, compared with having a baseline TRUST titer ≤1:8 (HR = 1.43, 95% CI = 1.10–1.85, P<0.01); primary syphilis (HR = 1.72, 95% CI = 1.27–2.33, P<0.001) was positively associated with serological cure, compared with participants with latent early syphilis.

Nontreponemal antibody titers are considered to be related to disease activity [19]. Romanowski, et al. reported that lower baseline titers (e.g., ≤ 1:8) in early syphilis were associated with an increased likelihood of seroreversion [20]. However, in our study we found that syphilis patients with higher baseline titers were more likely to achieve serological cure, which was the same as results from other studies [12,14]. A high baseline titer signifies a beneficial inflammatory and immune response to Treponema pallidum , which facilitates its clearance [21]. This outcome supported by an earlier study [22] that disclosed that Venereal Disease Research Laboratory (VDRL)-immunized rabbits exhibited partial protection against reinfection with Treponema pallidum. Therefore, higher baseline nontreponemal titers may indicate a beneficial inflammatory and immune response to T. pallidum.

There are several limitations to our study. First, there may be selection bias, and some participants were lost to follow-up. Second, some information bias may exist, especially in collecting private information since the participants may not have given accurate answers. Three, some variables (e.g., patients with a history of syphilis) were not included in the analysis because of the relatively small sample size.

, , , , , , Factors Associated with Serological Cure and the Serofast State of HIV-Negative Patients with Primary, Secondary, Latent, and Tertiary Syphilis. PLoS One. 2013;8(7):7.

. WHO Guidelines for the Treatment of Treponema pallidum (Syphilis). World Health Organization Geneva 2016.

. Guidelines for the diagnosis and treatment of syphilis, gonorrhea, genital herpes and genital Chlamydia trachomatis infection (2014). Chinese Journal of Dermatology. 2014, 47(5): 365–372.

, , , , . Serological Response to Treatment of Syphilis According to Disease Stage and HIV Status. Clin Infect Dis. 2012;55(12):1615–22. doi: 10.1093/cid/cis757
This is an open access article distributed under the terms of the Creative Commons Attribution License, which permits unrestricted use, distribution, and reproduction in any medium, provided the original author and source are credited.
Recommended articles
Translation and validation of caring behaviors inventory among nurses in Iran
PLoS ONE
Implementation of the Ebola Virus Persistence in Ocular Tissues and Fluids (EVICT) study: Lessons learned for vision health systems strengthening in Sierra Leone
PLoS ONE
Using Assessment Design Decision Framework in understanding the impact of rapid transition to remote education on student assessment in health-related colleges: A qualitative study
PLoS ONE
Clinical utility of the BioFire FilmArray Blood Culture Identification panel in the adjustment of empiric antimicrobial therapy in the critically ill septic patient
PLoS ONE
Dissemination of COVID-19 in inland cities of Northeastern Brazil
PLoS ONE
Balanced carbohydrate ratios are associated with improved diet quality in Australia: A nationally representative cross-sectional study
PLoS ONE
Variation of virulence of five Aspergillus fumigatus isolates in four different infection models
PLoS ONE
Clinical and bioethical implications of health care interruption during the COVID-19 pandemic: A cross-sectional study in outpatients with rheumatic diseases
PLoS ONE
Gender inequality among medical, pharmaceutical and dental practitioners in French hospitals: Where have we been and where are we now?
PLoS ONE
Scoping review of the characteristics assessed by vulnerability indices applied to people experiencing homelessness
PLoS ONE