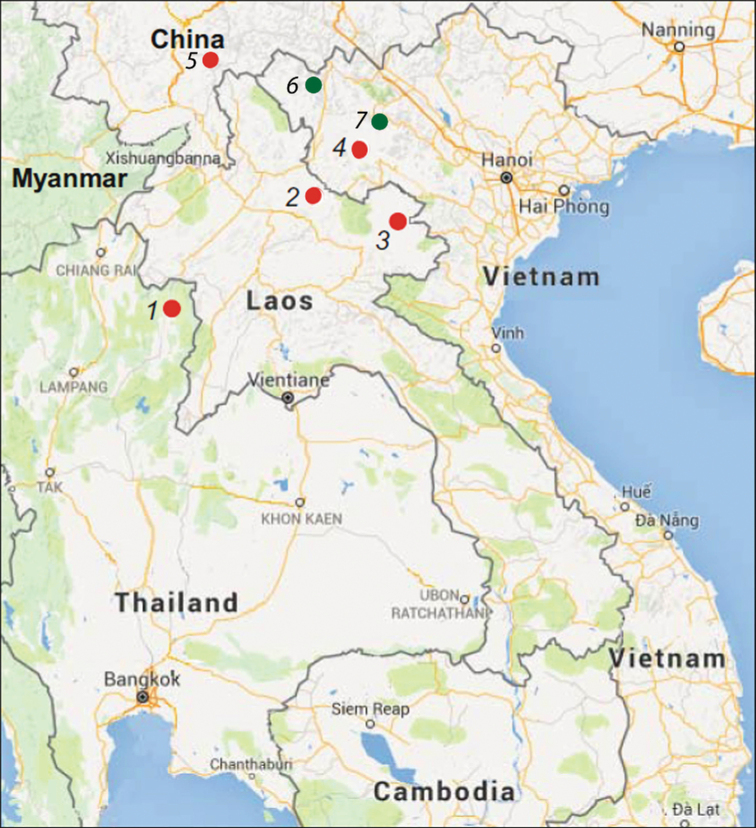 A new record of odd-scaled snake (, ) from Vietnam: expanded description of based on integrative taxonomy
Nikolai L. Orlov, Oleg A. Ermakov,

Based on the combination of molecular and morphological data, we herein report the second known finding of the xenodermid snake species Ziegler, Ngo, Pham, Nguyen, Le & Nguyen, 2018. The male individual was found in the Yen Bai Province of northwestern Vietnam, more than 200 km from the type locality in Lai Chau Province. Genetic divergence between the newly-collected male and the holotype was low (1.7%), and is in agreement with morphological data that supports that they are conspecific. We give a detailed description of the morphological characters and coloration of the new record and provide an expanded diagnosis of . is a poorly-understood genus, and our recent discovery brings the total number of known specimens of the genus to nine, 1/3 of them having been found in Vietnam (one specimen of and now two specimens of ).

The snake family Xenodermidae is one of the most poorly-known groups of Asian reptiles. The family is composed of five genera and 23 recognized species that are distributed throughout South, Southeast, and East Asia (Uetz et al. 2020). Many species are only known from a single or a few specimens from a limited number of localities. Among these five genera, Parafimbrios Teynié, David, Lottier, Le & Vidal, 2015 only has two recognized species, which are endemic to Indochina and occur across Laos, Vietnam, Thailand and south China (Nguyen et al. 2015; Teynié et al. 2015; Teynié and Hauser 2017; Ziegler et al. 2018; Cai et al. 2020) (Fig. 1). The genus was originally described as monotypic, including only Parafimbrios lao Teynié, David, Lottier, Le & Vidal, 2015 from Louangphabang and Houaphan provinces in northeastern Laos, based on a unique set of morphological characters and high levels of genetic divergence (Teynié et al. 2015). Three years later, the second species was described as Parafimbrios vietnamensis Ziegler, Ngo, Pham, Nguyen, Le & Nguyen, 2018 from Lai Chau Province in northwestern Vietnam. Until recently, P. vietnamensis was only known from the holotype male. However, during a recent herpetological survey in Yen Bai Province in northern Vietnam, another male specimen was collected that had the unique set of morphological characteristics and color pattern typical for P. vietnamensis. Subsequent molecular analysis confirmed the morphological findings and we herein provide a detailed description of the second known specimen of P. vietnamensis and an expanded diagnosis of the species.

This discovery brings the total number of known specimens of Parafimbrios to nine and of P. vietnamensis to two. This work highlights the difficult nature of discovering specimens of this snake family and the need for further surveys in these areas of Vietnam and Eastern Laos.

This study is based on a single male specimen of Parafimbrios vietnamensis (ZISP 31426) from Che Tao Village, Che Tao Commune, of the Mu Cang Chai Species and Habitat Conservation Area (SHCA) (21.5435°N, 104.0364°E, elevation 1300 m) in Yen Bai Province, Vietnam. The specimen was collected on November 30th, 2019, by Nikolai Orlov and Larissa Ioganssen and was fixed and subsequently stored in 75% ethanol. A tissue sample was preserved separately in 95% ethanol. The specimen was deposited in the herpetological collection of the Zoological Institute, Russian Academy of Sciences (ZISP), St. Petersburg, Russia.

Sex was determined by inspection of the presence or absence of hemipenes. Measurements were taken to the nearest mm with digital calipers. Paired meristic characters are given as left/right. The methodology of measurements and meristic counts followed Teynié et al. (2015) and Ziegler et al. (2018). The following characters and ratios were evaluated and calculated (Table 1): snout-vent length measured from tip of snout to anterior margin of cloaca (SVL); tail length measured from posterior margin of cloaca to tip of tail (TaL); total length, corresponding to SVL + TaL (TL); ratio of tail length to total length (TaL/TL); number of maxillary teeth, counted by investigating the right maxilla for teeth/sockets. The pholidosis characters taken or counted are as follows: dorsal scale rows counted at one head length behind head, at midbody, and at one head length before vent, respectively. The number of ventrals, subcaudals, supralabials, infralabials, suboculars, loreals, preoculars, postoculars, temporals and cloacal scales were counted. Morphological comparisons were based on data from Teynié et al. (2015), Nguyen et al. (2015), Teynié and Hauser (2017), Ziegler et al. (2018), and Cai et al. (2020).

Museum abbreviations are as follows:

Description of the second specimen from Vietnam (Figs 2, 3).

Morphological characters of the second male specimen are concordant with those in the original description of Parafimbrios vietnamensis by Ziegler et al. (2018). The specimen has a cylindrical and slender body (Figs 2, 3). Head not distinct from neck, dorsally covered with large shields; eyes middle-sized, with a vertically sub-elliptic pupil. Morphological data of this new specimen, the holotype of P. vietnamensis, and comparative data on seven specimens of P. lao are summarized in Table 1. The second male specimen from Vietnam differs from the male holotype of P. vietnamensis in having a larger size (SVL 298 mm vs. 222 mm), a higher number of ventrals (172+2 vs. 164), and fewer temporals (2+3/2+3 vs. 4+4/4+5). The pholidosis characteristics of the number of ventrals and temporals look more similar to those seen in P. lao.

Phylogenetic analysis. Molecular analyses corroborate the morphological data. The new specimen is significantly genetically divergent from P. lao by at least 10%. The new sample was strongly supported as the sister lineage to the holotype of Parafimbrios vietnamensis (bootstrap support = 100%) (Fig. 5). Genetic divergence between the newly-collected specimen and the holotype was low (1.7%), and thus supports that they are conspecific. The mean uncorrected pairwise genetic distance between the two species within the genus Parafimbrios was 7.7±0.8%.

Coloration. The color of the dorsum is gray-brown, with varying intensity of brown depending on the angle of the light, and with iridizing sequins. The head is separated from the neck by a wide, light-colored nuchal collar extending to the ventral surface and to the chin; the collar does not completely cover the ventral part of the chin but stops at the ventral scales. The dorsal surface of the head is reddish-brown from the lateral edge of the head to the parietal scale and frontal scales. The gular region is brown; the two huge mandibular plates are brown anteriorly, lightening posteriorly. The color of the nuchal collar is a light cream, slightly white-pinkish. The color of the belly is smoky gray with lightened lateral edges of the abdominal scales.

Distribution.Parafimbrios vietnamensis is only known from two provinces (Lai Chau Province, Yen Bai Province) in northwestern Vietnam (Fig. 1). The second species, P. lao , is only known from northern Vietnam in the Son La Province, but has a much wider distribution in Laos, Thailand, Vietnam and southern China. This area of Vietnam is the highland region associated with Hoang Lien Son ridge (Lai Chau, Lao Cai, and part of Yen Bai). Biogeographically, the species inhabits the south-eastern part of the Sikang-Yunnan floristic Province of the Holarctic floristic kingdom (Takhtajan 1978).

The second male specimen from Vietnam differs from the male holotype of P. vietnamensis in having a larger size (SVL 298 mm vs. 222 mm), a higher number of ventrals (172+2 vs. 164), and fewer temporals (2+3/2+3 vs. 4+4/4+5). The number of ventrals and temporals are similar to those reported from P. lao. Morphological data from our new finding, the holotype of P. vietnamensis, and comparative data for seven specimens of P. lao are summarized in Table 1.

A species of the genus Parafimbrios, characterized by the following combination of characters: 1) rostral laterally with two raised, curved edges; the upper one, together with a horizontal curved ridge of tissue, separates the rostral from the internasals; 2) nasal in contact zone with rostral with curved, raised edge; 3) nasal in contact zone with supralabials with two small oblique, curved raised edges located above first and second as well as above second and third supralabials; 4) suture between the internasals much longer than that between the prefrontals; 5) supralabials 8, the first four bearing raised edges; 6) infralabials 7; mental and anterior three to four infralabials with raised edges; 7) temporals 2+3.2+3–4+4–5; 8) (31–35)-(33–35)-(27–29) dorsal scale rows; 9) laterally rounded ventrals 164–172+2; 10) unpaired subcaudals 48–49; 11) total length at least 266–354 mm in males (with a tail length of 44–56 mm and a TaL/TL ratio of 0.16). The coloration corresponds to that given in the original description (Ziegler et al. 2018): brownish-black above, with a broad yellow neckband widening towards the venter and stretching to the chin region; dorsal head surface in part reddish-brown, in particular in the middle of the parietals and frontal; venter grayish-brown, lighter anteriorly, darker towards tail region; ventrals anteriorly and laterally darker. It should be noted that we are most likely dealing with subadult specimens, with a pronounced whitish-pinkish nuchal collar. For example, in the related species Parafimbrios lao , the nuchal collar dims and disappears with age, which can be seen in Teynié et al. (2015: fig. 4). More findings of this rare snake will add information to this species’ diagnosis.

Parafimbrios vietnamensis was previously known only from Hoang Ho Village, Phang So Lin Commune, Sin Ho District, Lai Chau Province in northern Vietnam (Ziegler et al. 2018). Although the new locality in Yen Bai Province is more than 200 km southeast of the type locality, the samples exhibit a relatively low amount of genetic divergence from each other. The mountain systems in this area are composed of magmatic silicate rocks, particularly granite and quartzite, which were formed as extensive intrusions of late Paleozoic and Mesozoic age (Dovzikov et al. 1965). Tertiary tectonic movements uplifted these mountain terrains up to the present-day elevations, and subsequent erosion processes formed the present-day characteristic rocky landscape of this highland area, with very steep slopes, numerous rocky cliffs and deep and narrow river canyons (Fridland 1961; Averyanov et al. 2003). This area is extremely humid, with warm rainy summers and cold foggy and misty winters and without a distinct dry period. The peak of rainfall arrives in the summer months. Morning dew is very common throughout the mountain zone, as well as frequent heavy fog. Humid, cold, northeast monsoon winds that bring heavy fog, mist and drizzle are very common in the winter and early spring (Averyanov et al. 2003). Zonal types of vegetation in the studied area belong to a group of closed evergreen tropical monsoon (seasonal) submontane forests (Averyanov et al. 2003).

There are now three known specimens of genus Parafimbrios recorded in Vietnam: one of P. lao and two of P. vietnamensis. The discovery highlights the difficulty of finding specimens of Xenodermidae and the need for further surveys in these areas of Vietnam and Eastern Laos.

We are grateful to the directorate of the The Mu Cang Chai Species and Habitat Conservation Area (SHCA) for supporting our fieldwork. We would like to thank Larissa Lohanssen for assistance in the field and Svetlana Lukonina for her contribution to laboratory work. Many thanks to John Murphy, Thomas Ziegler and an anonymous reviewer for providing valuable comments on the manuscript. This study was supported by projects of the Russian Foundation of Basic Research #19-54-54003 and #19-04-00119 and by State Research Topic AAAA-A19-119082990107-3. We appreciate Alexandre Teynié for providing a distribution map of P. lao and Jesse L. Grismer for his kind help editing the manuscript. Field work in northern Vietnam was funded by The Ministry of Science and Technology (ĐTĐLCN.38/21) to Tao Thien Nguyen.