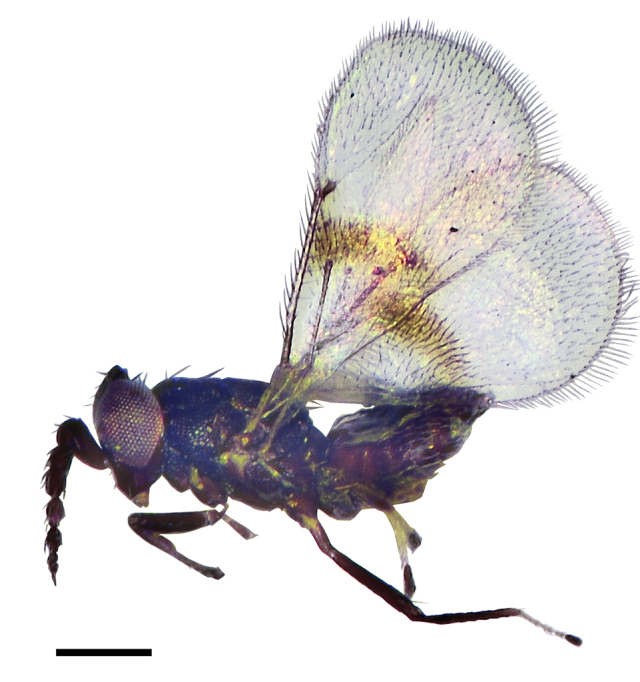 A new species of Förster, sp. nov. is described from Tibet, China and (Kamijo) is reported from China for the first time. A key to all known species of genus in China is provided.

The genus Asecodes (Hymenoptera, Eulophidae, Entedoninae) was established by Förster (1856), but he did not include any species in it. Förster (1861) described the first two species in Asecodes: A. fuscipes Förster and A. nitens Förster. Ashmead (1904) designated both species as type species of Asecodes , and Bouček (1988) subsequently selected A. fuscipes as its type species. Graham (1993) synonymized these two species under A. congruens (Nees, 1834). Bouček and Askew (1968) synonymized Ganahlia Dalla Torre with Asecodes , Hansson (1996) synonymized Teleopterus Silvestri, Metasecodes Erdős and Desmatocharis Graham with Asecodes. Up to now, this genus contains 26 valid species worldwide: 22 species were recorded in the Universal Chalcidoidea Database (Noyes 2019), and four species were described recently by Jamali et al. (2021).

The genus Asecodes can be easily separated from other genera in Entedoninae by: subtorular grooves present (Figs 2, 10); having a strong and complete occipital median sulcus which reaches from the occipital margin to the foramen magnum (Fig. 21), instead of a weak fold (Fig. 22). More characters of Asecodes can be seen in Hansson (1994) and Hansson (1996).

Before this study, there are only three species of Asecodes known from China, Asecodes sinense (Ling) was first described from China by Ling (2000), A. turcicum (Nees) and A. delucchii (Bouček) were reported from China by Ling (2000) and Zhang et al. (2007) respectively. This paper includes five species of Asecodes distributed in China, A. medogense sp. nov. is described as new to science, and A. reticulatum (Kamijo) is first reported from China. A key to all known Chinese species based on females is provided.

Specimens were collected by Malaise traps and sweeping nets and were mounted on a card, or dissected and mounted in Canada Balsam on slides following methods described by Noyes (1982). Photos were taken with an Aosvi AO-HK830-5870T digital microscope or a digital CCD camera attached to an Olympus BX51 compound microscope. The quality of these photos was improved by using Helicon Focus 7 and Adobe Photoshop 2020. Measurements were made using the built-in software of Aosvi AO-HK830-5870T.

Key to Chinese species of the genus Asecodes (females) Female. Scape strongly compressed from side to side and expanded from base to apex, with apex of ventral margin curved nearly in right-angle; pedicel as long as F1; F3 distinctly paler than other segments (Fig. 3); mesoscutellum densely and entirely reticulated with small meshes; propodeum with groove along median anterior margin, without carina or plica (Fig. 4); fore wing with a complete infuscate transverse band below MV (Fig. 5).

Head (Fig. 2), narrow in dorsal view. Upper face and vertex with strong reticulate sculpture, lower face with weak and irregular sculpture. Frontofacial sulcus weakly V-shaped, in an angle of about 130°. POL:OOL = 8:5. Occipital median sulcus present and complete. Inner orbits sinuate in lower part. HE:MS:WM about 3.3:1: 1.8. Malar sulcus present. Antenna (Fig. 3) inserted above level of lower margin of eyes. Subtorular grooves present. Scape reticulated, strongly compressed laterally and expanded from base to apex, about 2.1 times as long as its maximum width, with apex of ventral margin curved nearly in a right-angle. Pedicel as long as wide, and as long as F1. F1 quadrate, slightly shorter than F2 (about 0.8 times); F2 slightly longer than wide (about 1.2 times); pedicel and F1–F2 with strong and long setae. F3–F5 longer than wide and distinctly narrower than F2; F3 1.7 times as long as wide; F4 twice as long as wide; F5 narrowest, with a long terminal spine.

Mesosoma (Fig. 4), 1.2 times as long as wide. Pronotum reduced, invisible in dorsal view. Mesoscutum, mesoscutellum and axillae entirely with strong reticulate sculpture, meshes on midlobe of mesoscutum and mesoscutellum small and dense (compared with A. reticulatum ), but wider than that on lateral lobe of the mesoscutum and axillae; propodeum almost smooth; metascutellum and lateral panels of metanotum with weak and irregular sculpture. Notauli incomplete, indicated only in anterior part. Midlobe of mesoscutum with two pairs of setae. Anterior part of axillae advanced forward in front of level of anterior margin of mesoscutellum. Mesoscutellum as long as wide, with one pair of setae. Propodeum long, about 0.34 times as long as mesoscutellum, with a groove along median anterior margin, without carina or plica. Fore wing (Fig. 5) twice as long as wide. Ratio length of: SMV:MV:PMV:STV about 5.5:8.5:1:1. Speculum closed below, with two stigmal hairlines. Hind wing (Fig. 6), 5.2 times as long as wide. Legs (Fig. 8), with coxae distinctly reticulated; mesotibial spur as long as corresponding basitarsus; metatibial spur shorter than corresponding basitarsus.

The specific name is derived from the name of the collection locality of the type specimens. Female. Scape compressed, with apex of ventral margin curved smoothly in a wide arc, pedicel as long as F1 (Fig. 11); mesoscutellum sparsely and entirely reticulated with wide meshes, propodeum shorter than 1/3 length of mesoscutellum (Fig. 12); fore wing twice as long as wide, and with an infuscate transverse band below MV, disc of fore wing with sparse setation (Fig. 13).

See Kamijo (1986) for a detailed description; our specimens agree well with this description.

Female. Scape compressed, pedicel slightly shorter than half the length of F1; mesoscutellum with anterior 2/3 reticulated, posterior 1/3 smooth and shiny; fore wing with an infuscate transverse band below MV; metasoma longer than head plus mesosoma (ratio length of: metasoma : head : mesosoma about 5.2:1:3.5); gaster oblong ovate, about 2.2 times as long as its maximum width.

The original description of Asecodes sinense was given by Ling (2000). This species is similar to A. turcicum in having the fore wing with an infuscate transverse band below MV; mesoscutellum with anterior 2/3 reticulated, posterior 1/3 smooth and shiny. It can be separated from A. turcicum by its oblong ovate gaster, which distinctly longer than mesosoma (metasoma subequal to mesosoma in A. turcicum).

See Nees (1834) for the original description, and Jamali et al. (2021) for the photographs of the neotype of Asecodes turcicum. Female. Scape normal, not compressed; fore wing hyaline, without infuscate transverse band, and with three stigmal hairlines: two stigmal hairlines toward the apex of wing and one towards parastigma (Fig. 20). Asecodes delucchii can be easily separated from other species distributed in China by its characteristic fore wing. An Indian species, A. zhui Jamali having a similar fore wing was described by Jamali et al. (2021). Asecodes delucchii differs from A. zhui in having the fore wing about 2.4 times as long as wide (fore wing more than three times as long as wide in A. zhui); with the longest marginal cilia 1/3–1/2 the maximum wing width (4/5 the maximum wing width in A. zhui).