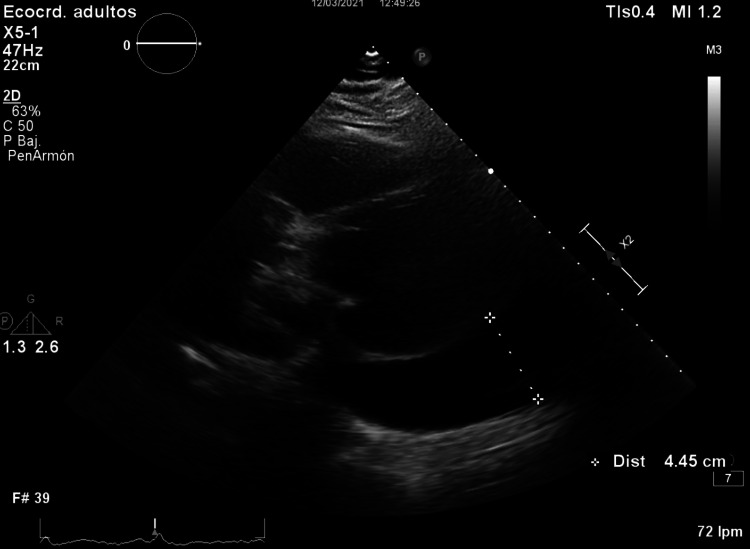 Some solid cancers (such as lung, breast, and esophageal cancer, and melanoma) can lead to pericardial effusion by metastatic spread, potentially provoking hemodynamic instability. Detection by echocardiography is therefore essential.

Pericardiocentesis can help restore cardiac function and provide fluid for establishing an etiology through cytological, microbiological, and cellularity analysis.

A 60-year-old woman with metabolic syndrome and obesity hypoventilation syndrome presented to the emergency department with dyspnea at rest. A chest X-ray showed cardiomegaly and massive left pleural effusion. Ultrasound findings were pericardial effusion with signs of cardiac tamponade. We performed pericardiocentesis, extracting 1000 mL of exudate, and thoracentesis, which confirmed the diagnosis of lymphocytic exudative effusion. A CAT (computerized tomography) scan of the chest, abdomen, and pelvis revealed a left kidney mass. A biopsy of the mass confirmed the diagnosis of clear cell renal cell carcinoma and a pleural biopsy revealed metastatic involvement.

This report describes a rare presentation of cardiac tamponade due to clear cell renal cell carcinoma and discusses the pathogenesis, mechanisms, and prognosis of this condition.

Cardiac tamponade due to neoplastic pericardial effusion is rarely associated with solid cancers (lung, breast, and esophageal cancer, and melanoma) [1]. Clear cell carcinoma can develop in multiple tissue types, including the kidney, uterus, gastrointestinal tract, or ovary. There are few published cases of cardiac tamponade secondary to all types of clear cell carcinoma [2]. The most common manifestations of renal cell clear cell carcinoma include non-metastatic hypertransaminasemia (Stauffer syndrome), varicocele, and bone metastasis.

We present the case of a patient with recurrent pericardial effusion with signs of tamponade, and recurrent pleural effusion, in the early stages of clear cell renal cell carcinoma. These findings suggested tumoral etiology, and we, therefore, ordered a CAT scan of the chest, abdomen, and pelvis. This technique revealed a large pericardial effusion (Figure 2A); pathological right hilar, right paratracheal and prevascular lymphadenopathy; bilateral pleural effusion; splenomegaly; and a left kidney mass (Figure 2B). In addition, pleural drainage was inserted due to recurrent pleural effusion and pleurodesis was administered with 500 mg of intrapleural doxycycline. Because of the patient´s high risk, only palliative treatment was considered.

A biopsy of the kidney lesion (Figure 3) confirmed the diagnosis of clear cell renal cell carcinoma, and a pleural biopsy revealed metastatic involvement. The prevalence of cardiac tamponade in neoplastic pericardial effusion is poorly understood. In a series of 96 cases of cardiac tamponade, 52% were secondary to neoplasms, with no evidence of renal origin in any case. Primary neoplasms include solid cancers such as lung and breast cancer, esophageal carcinoma, melanoma, and thymic carcinoma; and in rare cases, germ cell, renal, bladder, Merkel cell, or blood cancers [3].

Lung carcinoma is the primary tumor with the greatest pericardial involvement, accounting for up to 50% of cases of malignant cardiac tamponade. This is because it can spread to the mediastinal lymph nodes, from where it spreads retrogradely to the epicardial lymphatic plexus, increasing the volume of pericardial fluid [4].

The association between clear cell renal cell carcinoma [5] and cardiac tamponade, described in very few publications, is caused by the intravascular spread of the tumor (through the renal vein and inferior vena cava), leading in some cases to inferior vena cava thrombosis and right ventricular dysfunction. Cardiac involvement [6] without intravascular spread has been described in only two publications. According to the literature, clear cell renal cell carcinoma is found to have spread to the right atrium in fewer than 1% of cases at the time of nephrectomy. Post-mortem studies have revealed cardiac metastases in 11% of patients who die from renal clear cell carcinoma [7].

Metastasis can also occur by systemic spread through the intrathoracic lymphatic system, especially in the presence of disseminated disease and lung metastases.

Intrapericardial therapy with cisplatin or other agents may help to prevent recurring neoplastic pericardial effusion due to lung cancer and has also shown efficacy in effusion secondary to renal cell carcinoma when combined with oral colchicine [8]. Nevertheless, tumoral pericardial effusion has a poor prognosis, as it is considered an expression of widespread disease.

Consent was obtained or waived by all participants in this study

https://creativecommons.org/licenses/by/3.0/This is an open access article distributed under the terms of the Creative Commons Attribution License, which permits unrestricted use, distribution, and reproduction in any medium, provided the original author and source are credited.
Recommended articles
The Role of Lateral Internal Sphincterotomy in Haemorrhoidectomy: A Study in a Tertiary Care Center
Cureus
Do Blood-Borne Viruses Affect the Progression of Labor: A Hospital-Based Pilot Study
Cureus
Incidental Diagnosis of Healed Aortic Abscess Cavity
Cureus
Orthopedic Implant-Related Biofilm Pathophysiology: A Review of the Literature
Cureus
An Unusual Presentation of Herpes Esophagitis in an Immunocompromised Individual
Cureus
A Case of Traumatic Cerebrospinal Fluid Rhinorrhea Successfully Treated Using Intravenous Factor XIII Administration
Cureus
Conservative Treatment of Avulsion Injuries of the Lesser Trochanter in Adolescent Athletes
Cureus
Progressive Supranuclear Palsy: Improvement in Cognitive-Behavioral Disturbances and Motor-Function Disabilities Following Treatment With Antidepressants and Cholinesterase Inhibitors
Cureus
Medicolegal Evaluation of Long-Term Respiratory Functions in Patients Injured Due to Traffic Accidents
Cureus
Hemorrhagic Cholecystitis: A Rare Cause of Melena
Cureus